The Human Rights Defenders of Armenia and Artsakh have published an English ad-hoc report on the facts of the fake peace promotion of Azerbaijan, as a long-term threat to human rights 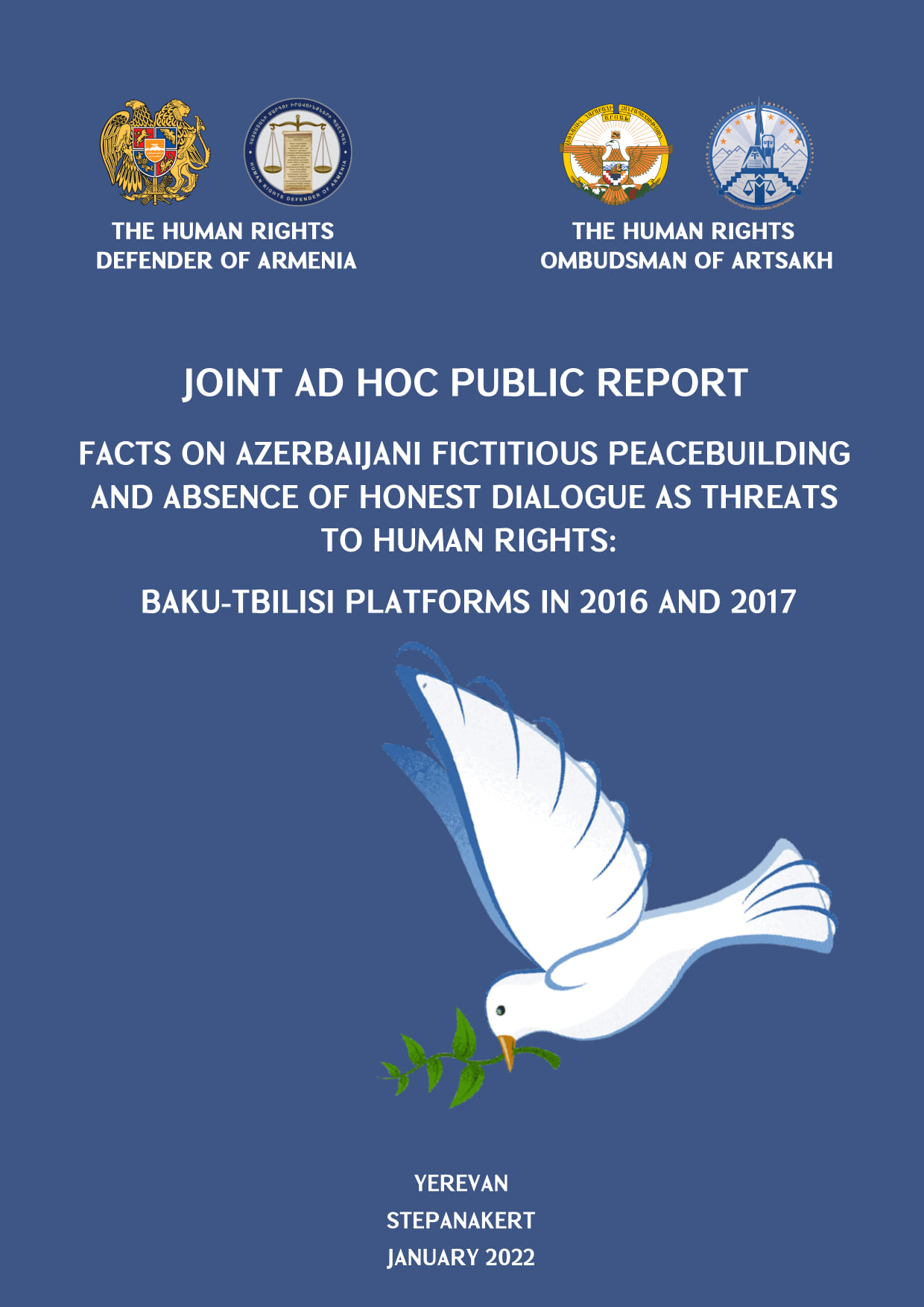 The Human Rights Defenders of Armenia and Artsakh have published an English ad-hoc report on the facts of the fake peace promotion of Azerbaijan, as a long-term threat to human rights.

The report is about the fact that the protection of human rights during conflicts and a true peace requires a dialogue which is based on honesty and trust. This dialogue is primarily necessary between societies to guarantee a long-term peace, and it is important that states refrain from making political directives or artificial interventions.

The principal factor is that the non-recognition of a state, and the political status of a territory cannot be an obstacle for the protection of the human rights of the people living there.

This report, presenting the peace-building initiatives related to Artsakh since the 1990s, makes a reference to the Baku-Tbilisi platforms, which were initiated by the Azerbaijani side immediately after the atrocities it committed during the April 2016 war.

These initiatives were declared as independent civil society initiatives, however, they were organized and directed by the Azerbaijani government and, in particular, the special services.

In addition to the fact that those platforms ignored the natural right to national self-determination, they also fully reflected only the Azerbaijani state policy. Moreover, these initiatives did not have any connection with the civil societies of Armenia and Artsakh; the Azerbaijani side had involved certain Armenians, who stood out with their Armenophobic speeches. At the same time, the Azerbaijani authorities continued their state-sponsored policy of Armenophobia.

The fact that these initiatives did not aim at busking a real peace, did not include independent NGO-s and activists, and that they were directed by the Azerbaijani authorities, are confirmed by the public interviews of Armenian activities, where they stated that fake statements were made in their names, and that the Azerbaijani authorities had promised bribes to make pro-Azerbaijan statements (for example, employment in Germany, etc.) All this information can be found in the published report.

Moreover, the speeches and interviews of Azerbaijani state officials can also be found in the report- these statements and interviews reveal the fact that the NGO-s and the activists included in the platform were dependent on, and were directed by the Azerbaijani authorities.

The Baku-Tbilisi platforms of 2016-2017 completely ignored the well-known international principle “no one should be sidelined, and no right should be ignored”.

These initiatives were supportive of the state policy of Azerbaijan, which has always been directed at the isolation of Artsakh from the outside-world, and the obstruction at all costs of the entry of international human rights organizations, and international experts and media to Artsakh.

The report was prepared by Mr. Arman Tatoyan and Mr. Ruben Melikyan, former Human Rights Ombudsman of Artsakh, immediately after the April 2016 war. However, due to objective reasons, it was only possible to finalize the report only recently.

Later, the content and the need of the report was also discussed with Mr. Artak Beglaryan (former Human Rights Ombudsman of Artsakh)

The report was concluded with the current Human Rights Ombudsman of Artsakh, Mr. Gegham Stepanyan.

The Human Rights Ombudsman of Artsakh