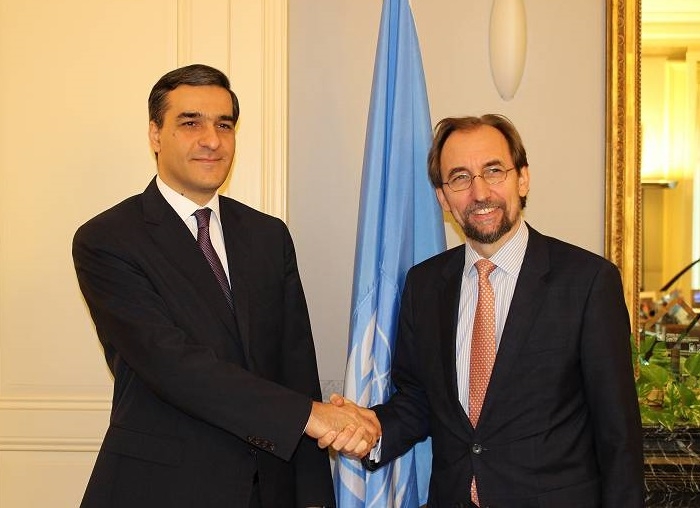 During the meeting Mr. Tatoyan presented to the High Commissioner concrete examples of atrocities and fundamental human rights violations, committed by the Azerbaijani armed forces against the civilian population of the Republic of Artsakh during the military aggression launched by Azerbaijan in the beginning of April.

Mr. Tatoyan passed to the High Commissioner the reports prepared by the Artsakh Human Rights Defender analyzing the above-mentioned events, as well as data and concrete facts regarding the prohibited weapons used and targeted attacks launched on civilian settlements by Azerbaijan.

Mr. Tatoyan particularly emphasized the importance of Artsakh Human Rights Defender’s participation in international meetings, since there is no link between this kind of participation and political issues, and such participation may be exclusively aimed at protection of human rights and prevention of violations.

During the meeting key regulations of the RA draft law on the Human Rights Defender were also presented and the importance of the Office of the UN High Commissioner’s opinion on the draft law was emphasized. The expansion of powers of the Human Rights Defender resulting from the recent Constitutional changes was stressed, including the authorization to follow the protection of human rights and freedoms not only by state and local government agencies but also by private organizations, and to assist to the restoration of rights and freedoms violated by those organizations.

At the end of the meeting Mr. Zeid Ra’ad Al Hussein offered to Mr. Arman Tatoyan that a constant contact should be maintained between their Offices and emphasized the importance of the role that the Armenian Human Rights Defender plays in maintaining contact between international organizations and RA authorities.