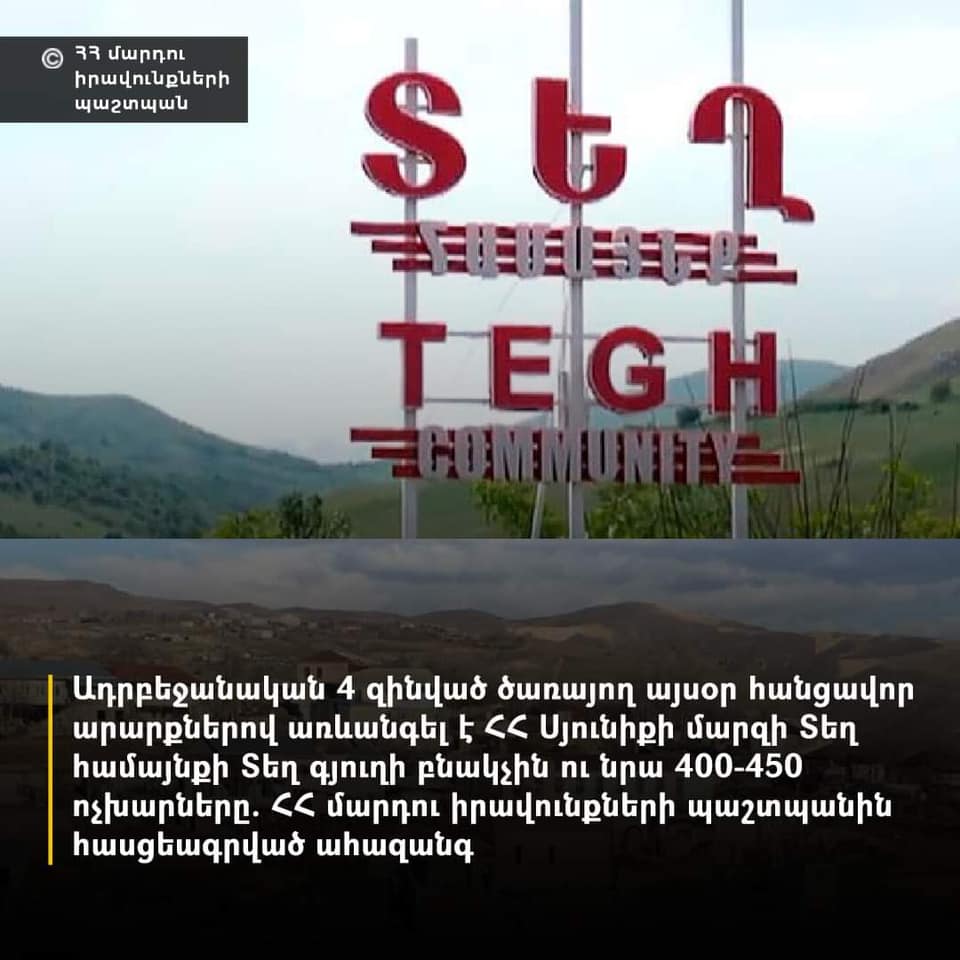 An alarming-call was addressed to the Human Rights Defender of Armenia about the fact that 4 Azerbaijani armed servicemen abducted by criminal acts a resident of Tegh village of Tegh community (Syunik province), and took his sheep.

According to the alarming-call, The Armenian resident was grazing his sheep in the pasture located on the intersection of Tegh, Aravous, and Khnatsakh villages of Tegh community. Around 15:30, 4 Azerbaijani armed servicemen noticed the resident and came down from their positions for a distance of around 150 meters, and took the Armenian resident to their side in the direction of Tsitsernavank, shouting, dragging, and using force against him. The Azerbaijani servicemen also took 400-450 heads of sheep belonging to the resident.

The alarming-call was verified: The above-mentioned is the account of a witness.

According to further clarification, the servicemen of the Border Guard Service of Russia were notified about the incident, and are conducting the necessary steps to return the Armenian citizen and his sheep.

This incident is an evidence of the criminal violations of Azerbaijani armed servicemen of the rights to life, personal liberty, and property of the peaceful Armenian resident.

The incessant crimes of Azerbaijani armed servicemen against the civilian population of Armenia, which are occurring on a daily basis, have made it impossible for people to lead a normal life, and are depriving them of earning a family income, and to engage in agricultural activities, and are causing social issues.

This incident further proves that Azerbaijani servicemen should not be deployed in the vicinity of Armenia villages, and on the roads connecting Armenian communities.

The need to solve this issue is urgent: It is necessary for the protection of the rights of people, and for the restoration of their normal life and security. A demilitarized security zone must be created.

The proposal of the Human Rights Defender of Armenia has already been included in an international instrument- in Resolution 2391 (2021) of September 27, 2021 of the Parliamentary Assembly of the Council of Europe (PACE).

The facts of this incident will be sent to international organizations by the Office of the Human Rights Defender.

The same should be done by the Government. This fact should be used for the purpose of protection of fundamental human rights.