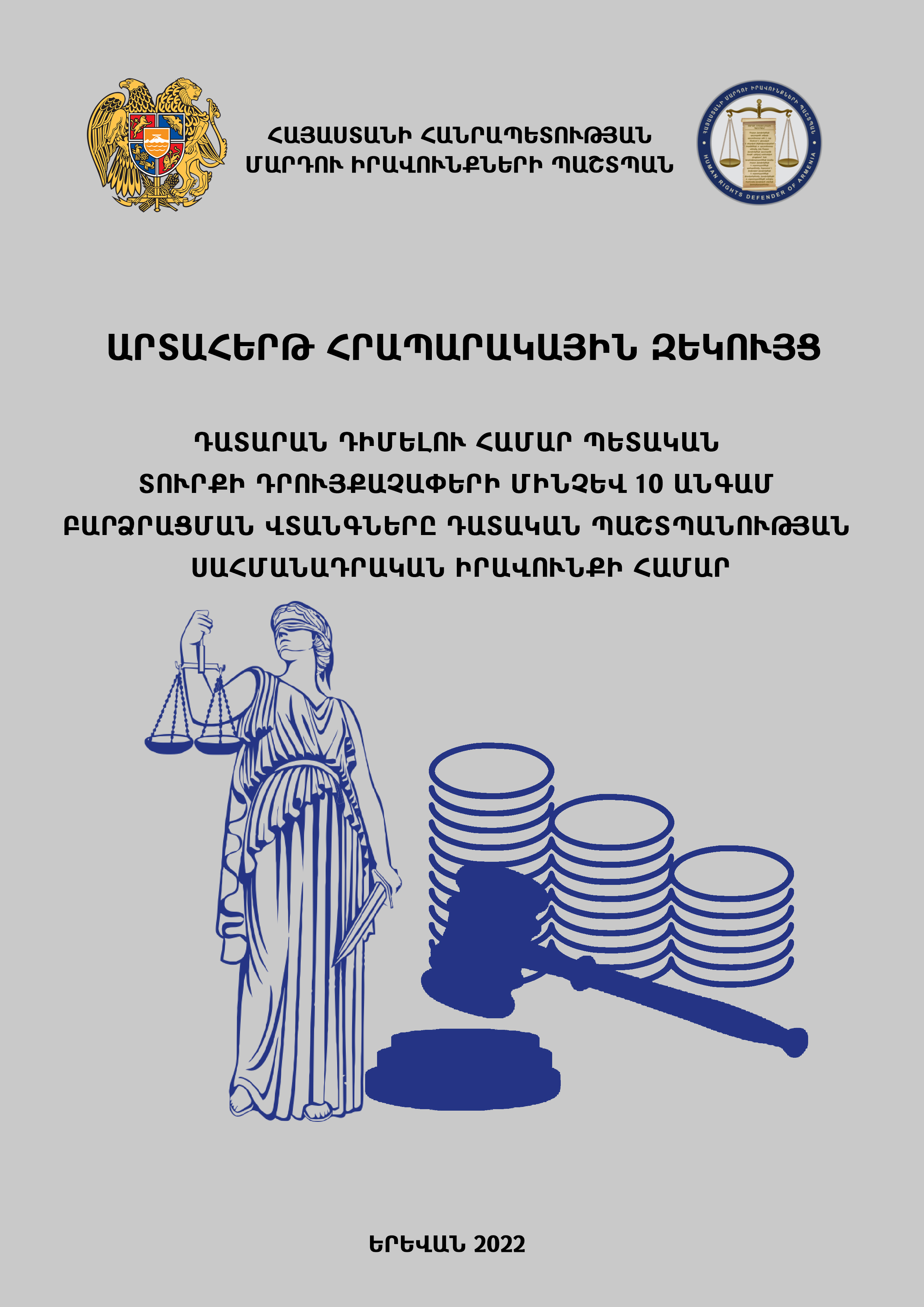 The Human Rights Defender of Armenia has published a public Ad-Hoc Report about the dangers of the tenfold increase in the state duty rates for applications to the courts.

According to the Human Rights Defender, the news rates create legal obstacles to apply to the court for the purpose of restoration of violated rights, and will lead to lead to unreasonable restrictions on the accessibility of courts.

In particular, on October 29, 2021, the amendments to the Law on State Duties entered into force, according to which the state duty rates for filing lawsuits, applications, appeals and cassation complaints against judicial acts, as well as to the state duty rates of the relevant photographs (photographic film), recordings, videos of the court cases, and the issuing of photocopies of the electronic versions of the above-mentioned in electronic storage devices.

The Human Rights has filed an application to the Constitutional Court about this issue, in which they have specifically referred to the justifications for increasing the state duty rates several times, which were presented during the adoption of the draft. These justifications are presented in such a way as if it is only possible to cover the expenses necessary for ensuring the normal functioning of the courts only by increasing the amount of state duties.

This implies that, the more the state duty rates are increased, the faster and easier the problems of the judicial system will be solved. In fact, the way to solve these issue is not to increase the state duties, but to allocate money to the Judicial Department of the Republic of Armenia to ensure the normal operation of the courts, according to the Law on State Budget of the Republic of Armenia (which is done every year).

In other words, the beneficiary of justice is the whole society; therefore, it is not right to put the entire burden of paying the necessary expenses to ensure the normal operation of the courts only on the participants of the trial. This way will simply lead to the restriction of the constitutional and internationally guaranteed right to access to a court.

The issues of improving the logistics of the courts, increasing the number of judges and the servants attached to them, improving their social guarantees, including improvement of their remuneration, and promoting the recruitment of new cadres into the judiciary should not be the basis for creating structures restricting human and constitutional rights, guaranteeing the protection of which and preventing their violation should be one of the primary priorities of the state.

The analysis of the Office of the Human Rights Defender shows that in the period from 2003 to 2021, along with the increase in the minimum wage, the prices of consumer goods, services, etc. also increased, which means that only the minimum or average monthly wage indicators, and the value of the minimum consumer basket are not sufficient to justify the increase in state duty rates.

Such issues need to be addressed through mechanisms that do not disproportionately restrict the constitutionally guaranteed rights of the individual. Addressing existing issues in the state system by increasing the amount of duties and restricting human rights is an absolutely unacceptable approach.

Solving the existing issues in the State apparatus through the increase in the rates of duties and restricting human rights is a completely unacceptable approach.