Failure to cover the activities of the Human Rights Defender of Armenia over a period of time in violation of the legislation creates a reasonable assumption of the existence of an agreed policy of the Council of the Public Broadcaster and H1: Letters hav 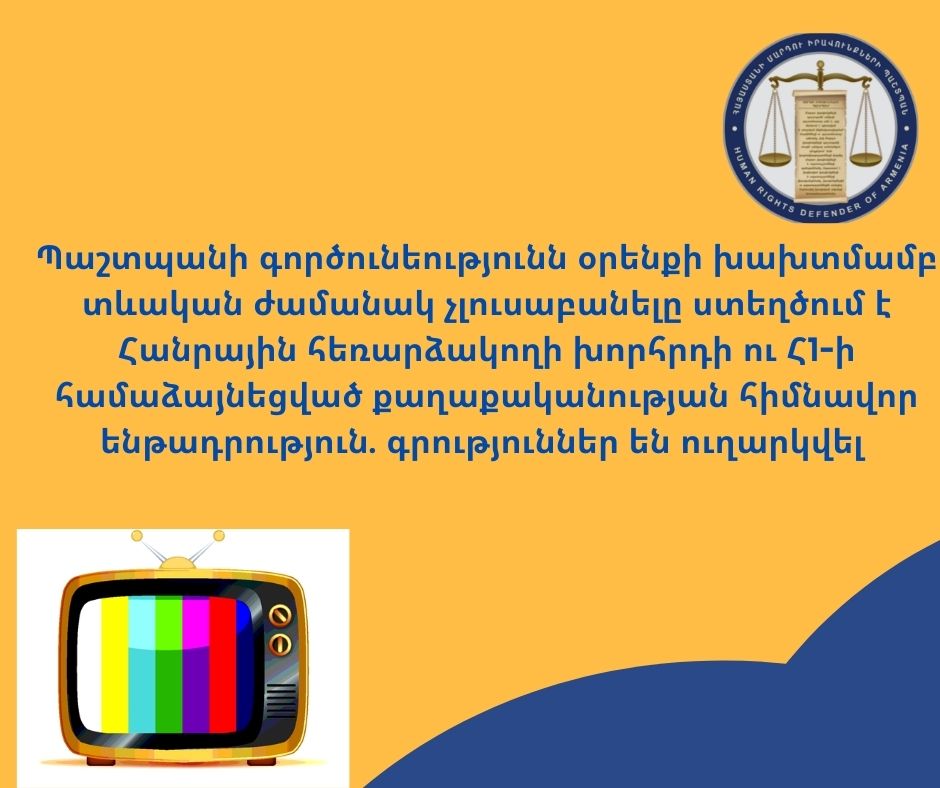 The Human Rights Defender of Armenia has addressed letters to the Council of the Public Broadcaster, Commission on the Television and radio of Armenia, as well as to the Public Television, to request clarifications on the banning of the coverage of the activities of the only state institution mandated to protect human rights by the Constitution of Armenia by the Lurer program, and to demand explanations about the policies violating human rights, legislation, and international requirements, and the non-compliance with state obligations.

The Human Rights Defender of Armenia presented the results of the targeted monitoring conducted over a period of 5 months through a comprehensive statement on December 28, 2021, stressing that the Public Television, being an institution established by the Government of Armenia, continues to ignore the publications of the Human Rights Defender of Armenia about the important events taking place in the country in its Lurer program, and operates on the principle of excluding the broadcasting of the Defender's activities as much as possible.

The situation has worsened since the publication of the above-mentioned statement.

The issue refers to making the numerous publications, analyses, reports, and public awareness-raising activities of the Human Rights Defender inaccessible to the public, and hiding issues related to the rights of people and the proposed solutions, starting from combat against hate and insult, women’s and children’s rights, the rights of persons in psychiatric and penitentiary institutions, as well as the security of the border residents.

The Lurer program of the Public Television is “closed” specifically to statements related to protection of the rights of the border residents, the unlawful actions of Azerbaijani servicemen, and the proposals of the Human Rights Defender to remove them from the vicinity of the villages and the roads between the communities of Armenia.

This situation not only does not promote a correct public discourse and citizens’ oversight of the State, but People in Armenia, Artsakh and the Diaspora are not informed about the ways to remove Azerbaijani servicemen from the vicinity of villages and roads of Armenia from a human rights perspective. The development of a discussion on how security and human rights are interconnected is not being developed.

This policy violates the RA Law on Audiovisual Media, at the same time violating the European Convention on Human Rights, PACE, Committee of Ministers of the Council of Europe, the OSCE, as well as a number of other international requirements

The fact that the coverage and the high public access to the Office of the Human Rights Defender is an important indicator of the level of democracy in the country, and is at the basis of the international accreditation of the institution. That is, the issue is related to an institutional attitude.

Taking into consideration the above-mentioned, detailed inquires have been to the competent bodies.

In the letter addressed to the Council of the Public Broadcaster, it is stressed that if the raised concerns are not substantially addressed, the current and ongoing concerning situation will be perceived as a result of the policy of the Public Broadcaster and H1, taking into consideration the results of the monitoring conducted by the Office of the Defender. The current existing factors already create such a reasonable assumption.

It appears as if the a “lesson” is being taught to the only national constitutional body for the protection of human rights: if the political or the Government attitude towards the institution alters, the attitude of the Public Television established by the government will also alter, stopping the coverage of the activities of the Defender, even the expense of violating the legislation.

At the same time, the objective coverage of human rights issues, the public discourse, including the promotion of critical information, is the positive obligation of the state, which in this case is the responsibility of the Public Television, and the Council of the Public Broadcaster.