Azerbaijani armed servicemen violate the rights of the Armenian border residents every day. Hence, the need to create a security zone is urgent: Speech of The Human Rights Defender at the high-level international discussion 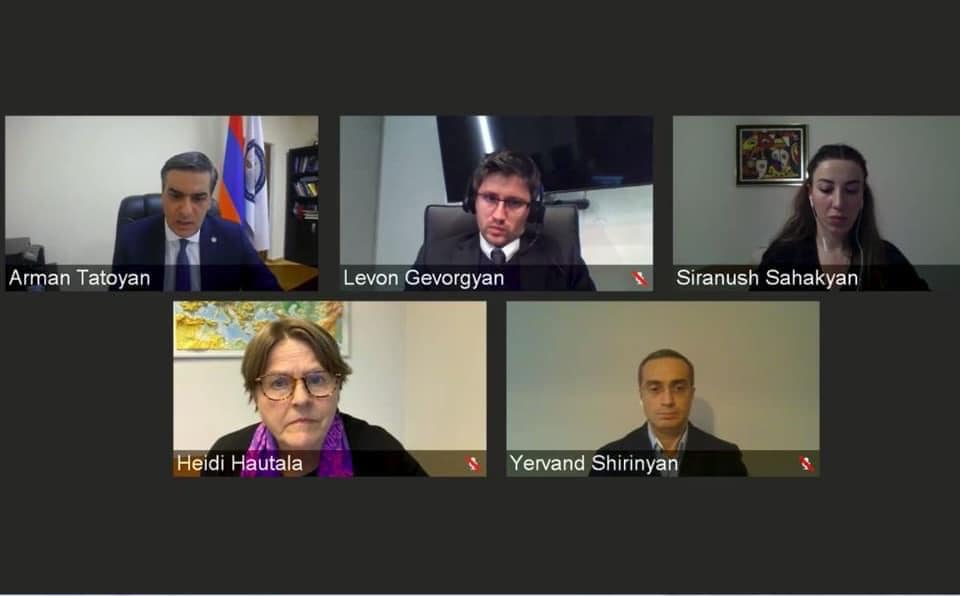 After the end of the 2020 war, and under threats of a new war, Azerbaijani armed servicemen positioned themselves in the vicinity of the villages of Gegharkunik and Syunik provinces, and on the roads connecting the communities of Syunik province. This was announced by the Human Rights Defender of Armenia during an online discussion titled “Human Rights Challenges a Year After the 44-Day War in Nagorno-Karabakh” held with the initiation of the Open Society Foundations- Armenia.

The purpose of the discussion was to deliberate in detail about the human rights situation around the Nagorno-Karabakh conflict after the war, the humanitarian crisis created after the hostilities, and the role of international organizations, in particular that of the European Union, the OSCE, the Council of Europe and the UN.

“We must realize that this war has a human rights dimension in addition to the political and military one, however this component is completely ignored. The Azerbaijani armed forces violate the rights of the Armenians living on the border almost every day. Therefore, the creation of a security zone, which we have proposed, is a need to restore the normal life of the people living on the border, and to start the negotiations on demarcation and delimitation of the border.”- noted the Human Rights Defender of Armenia.

Mr. Arman Tatoyan also referenced the state-sponsored policy of Armenophobia by the Azerbaijani authorities. “The state-sponsored policy of Armenophobia and enmity by the Azerbaijani authorities against Armenia and Artsakh has two pillars: Religious and ethnic.  This Azerbaijani policy is also a threat to the democracies and human rights of those countries where Armenians and Azerbaijanis live. This is a policy which aims at maintaining the enmity between these two people around the world.”- noted Mr. Arman Tatoyan.

During the online event organized by OSF-Armenia Ms. Heidi Hautala, the Vice-President of the European Parliament, and a member of the Group of the Greens/European Free Alliance in the European Parliament; Ms. Siranush Sahaykyan, lawyer and Co-Founder of Path of Law NGO, and Mr. Levon Gevorgyan, lawyer and member of the legal team representing Armenia in the International Court of Justice.

The participants of the discussion agreed that the active and greater involvement of international organizations is extremely important at this stage. In particular, the deployment of a monitoring mission at the border with the mandate of the OSCE and the UN High Commissioner for Human Rights and with the assistance of the EU, will help to address the human rights violations and the border situation.

The speakers also stressed the need to ensure the unimpeded entry of international organizations to Artsakh, in particular that of UNESCO. During the discussion, it was specifically emphasized that the international community should give a proper assessment to the current events and not to view both sides with parity.

International organizations need to be more honest in their public statements and policies, especially on the issue of the immediate return of the Armenia captives held in Azerbaijan as well as the hate speech and discrimination committed by high-level Azerbaijani officials against Armenians.