In Kosh penitentiary institution, the convict was given expired medicine: The Office of the Human Rights Defender discovered a large number of expired medications, negligently filled and deleted registers 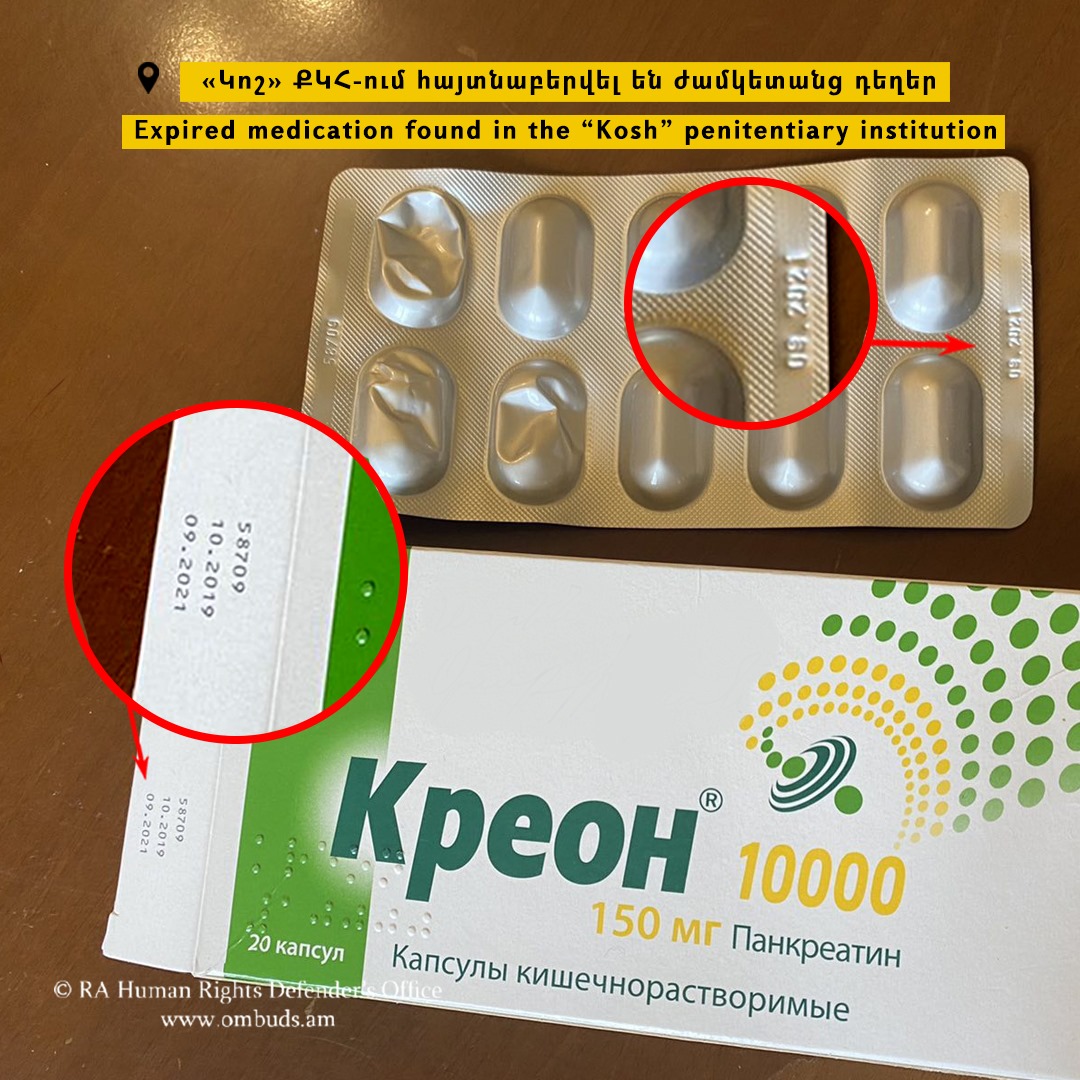 Yesterday, on October 25, the Office of the Human Rights Defender of Armenia received an alarming-call about the fact that the convict had been provided with expired medicine in the Kosh penitentiary institution of the Ministry of Justice. According to the alarming-call, the convict received rash in the area of their abdomen and a feeling of heartburn.

Based on the alarming-call and on the instructions of the Human Rights Defender Mr. Arman Tatoyan, the National Preventive Mechanism conducted an unannounced visit to Kosh penitentiary institution.

During the visit, a large number of expired medications were found in the Kosh subdivision of the Penitentiary Medicine Center SNCO: Amlodipine", "Verapamil, Dicino, Activated charcoal, Corsiz, Reopolyglyukin, and Polyglyuk.

Moreover, during the examination of the Convicts' Outpatient Medical Care register, the representatives of the Defender recorded that the convict had received various medicines in connection with his health complaints without the instruction relevant doctor.

It should be noted that the examination of the convict's medical record revealed that the latter underwent a medical examination on October 14, 2021, and was diagnosed with chronic total catarrhal colitis, and Ulkavis, Doxycycline and Linex were prescribed to them. However, the prescribed medicines were not provided to the convict, except for 1 pill of Linex.

According to the convict's outpatient medical record, the previous medical examination took place on May 19, 2021, and did not prescribe any long-term treatment.

Moreover, during the visit to Kosh penitentiary institution it was registered that the working rooms of the medical subdivisions were in a very unacceptable sanitary and hygienic condition.

Medication registers have been deleted and completed with neglect. According to the Office of the Human Rights Defender, the deletions were made for the purpose of artificially changing the quantities of medications.

The Department for Prevention of Torture and Ill-Treatment (National Preventive Mechanism) of the Office of the Human Rights Defender of Armenia will continue its monitoring and studies in relation to the issue of medical services, including the issue of expired medications, in the penitentiary institutions of the Ministry of Justice.

This practice should be ceased immediately and systematically, considering the fact that the monitoring of the Office of the Human Rights Defender has registered more cases of expired medications, deleted registers and registers completed with neglect, and unacceptable sanitary and hygienic conditions.

Not all the names of the expired medications are published in this statement. The rest will be sent to the Ministry of Justice with an official letter.