With the assistance of the Human Rights Defender, the citizen living abroad was examined in absentia, the criminal prosecution for evading military service was terminated, and he has been registered in the reserve 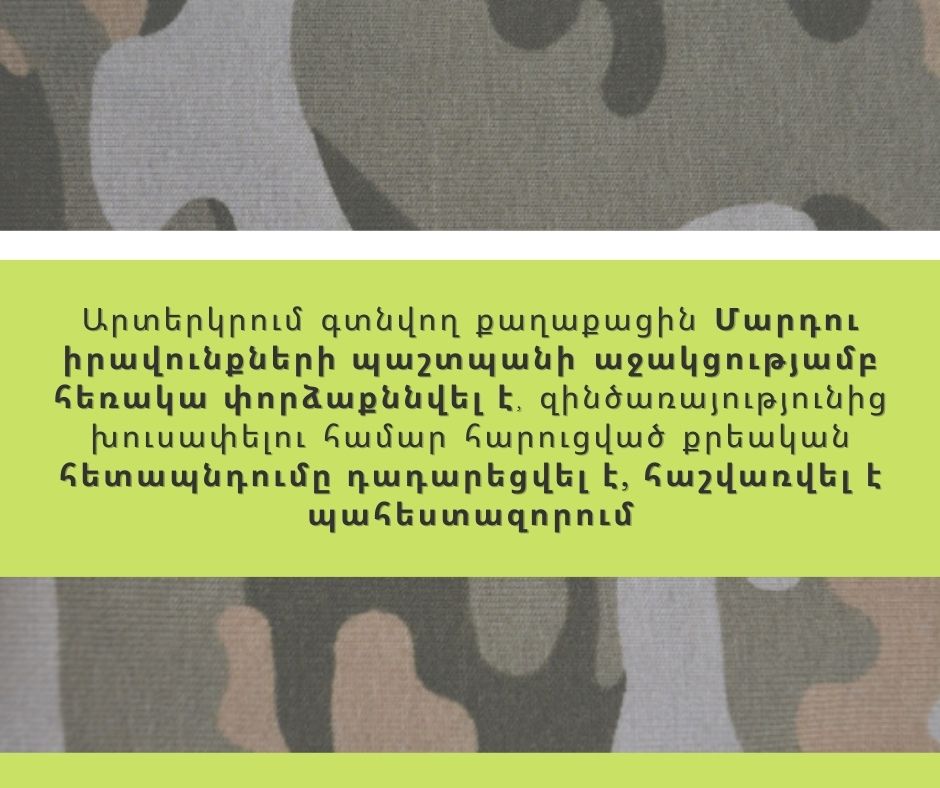 The citizen requested the assistance of the Human Rights Defender of Armenia for the purpose of terminating the criminal prosecution against their son, for registering him in the reserves, and for receiving a military identity card and an Identity Card.

The applicant informed that their son had been living abroad permanently, had returned to Armenia in 2007 and had been included in the military registration. In 2008, the son suffered serious health issues and was receiving treatment abroad.

The citizen noted that the temporary residence card given to their son was going to be expired, as a result of which their son was not going to be able to remain there and receive treatment. To extend the term of the temporary residence, the son should have a valid (not expired) Identity Card; he had applied to the embassy of Armenia in that country in order to receive an Identity Card, but was refused on the grounds that he did not have a military identity card.

The citizen had applied to the Ministry of Defense, which demanded a document demonstrating that their son cannot be transferred to Armenia due to his health situation- the citizen presented the necessary documents. Afterwards, the citizen was informed that as their son was over 27 years old, he cannot be examined by the Central Medical Commission, be registered in the reserves and receive a military identity card. Moreover, the citizen was informed that a criminal persecution was initiated against their son for evading conscription.

A study of the documents submitted by the citizen to the Office of the Human Rights Defender revealed that transferring their son to another country could seriously worsen his health.

During the analysis of the complaint, the Office of the Defender suggested to the Prosecutor’s Office to conduct a medical examination in absentia. As a result, the required examination was appointed and conducted. During the process, the Office of the Human Rights Defender conducted discussion with Military Prosecutor’s Office, the General Department of Military Investigation, Scientific-Practical Center of Forensic Medicine, and the Central Military-Medical commission of the Ministry of Defense.

As a result of the steps undertaken and the cooperation with the competent state bodies, the criminal prosecution against the son was terminated, he was registered in the reserves, and the obstacles for receiving a military identity card and an Identity Card were removed.