The Azerbaijani servicemen are again starting fires in the vicinity of the villages of Gegharkunik province: The Human Rights Defender is receiving alarming-calls 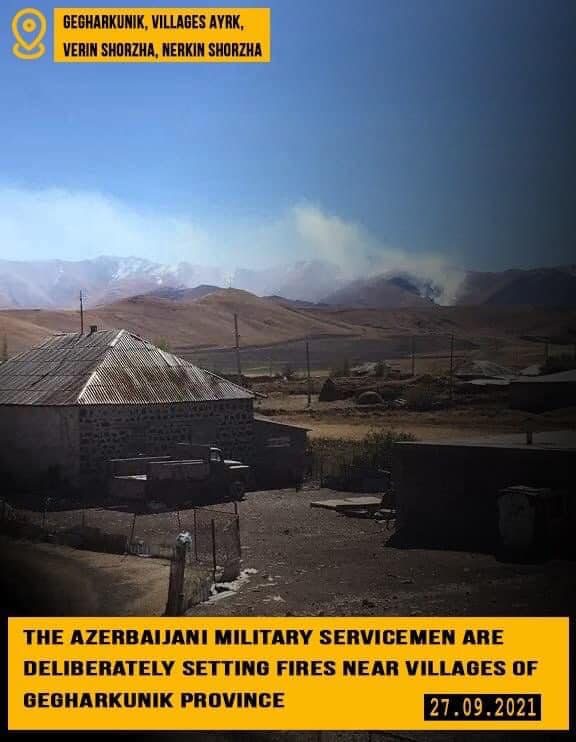 Today, the Office of the Human Rights Defender has received alarming-calls about the fact that Azerbaijani servicemen have been setting fires in the vicinity of Verin Shorja, Nergin Shorja and Ayrk villages of Gegharkunik. This primarily concerns the grasslands and pastures of the residents, which are being destroyed by the fires.

Taking into consideration that the Azerbaijani armed servicemen have invaded and positioned themselves in the immediate vicinity of the villages in the sovereign territory of the Republic of Armenia, the fires pose a real threat to the civilian population of the villages as well. These fires are contributing to the deepening of people’s social issues.

The studies of the alarming-calls prove that these subversive acts against the civilian population of Armenia are committed deliberately.

Approximately a month ago, the Azerbaijani servicemen had set fires in the vicinity of the villages of Gegharkunik provinces (Kut, Verin Shorja, Sotk, etc.). This concerns areas on higher plateaus, where people are obliged together with firemen and rescue workers, to put out the fires by hand, while the Azerbaijani servicemen were setting new fires.

The evidence of the actions of the Azerbaijani armed prove that they are becoming more dangerous for the civilian population, have a direct intention to harm them, and have become targeted; There are gross violations of human rights.

This statement of the Human Rights Defender will be sent to international organizations; it will also be sent separately to the state bodies of Armenia, and to civil society organizations