The decisions on disability status are cursory, while the mechanisms of appeal are ineffective: The Human Rights Defender 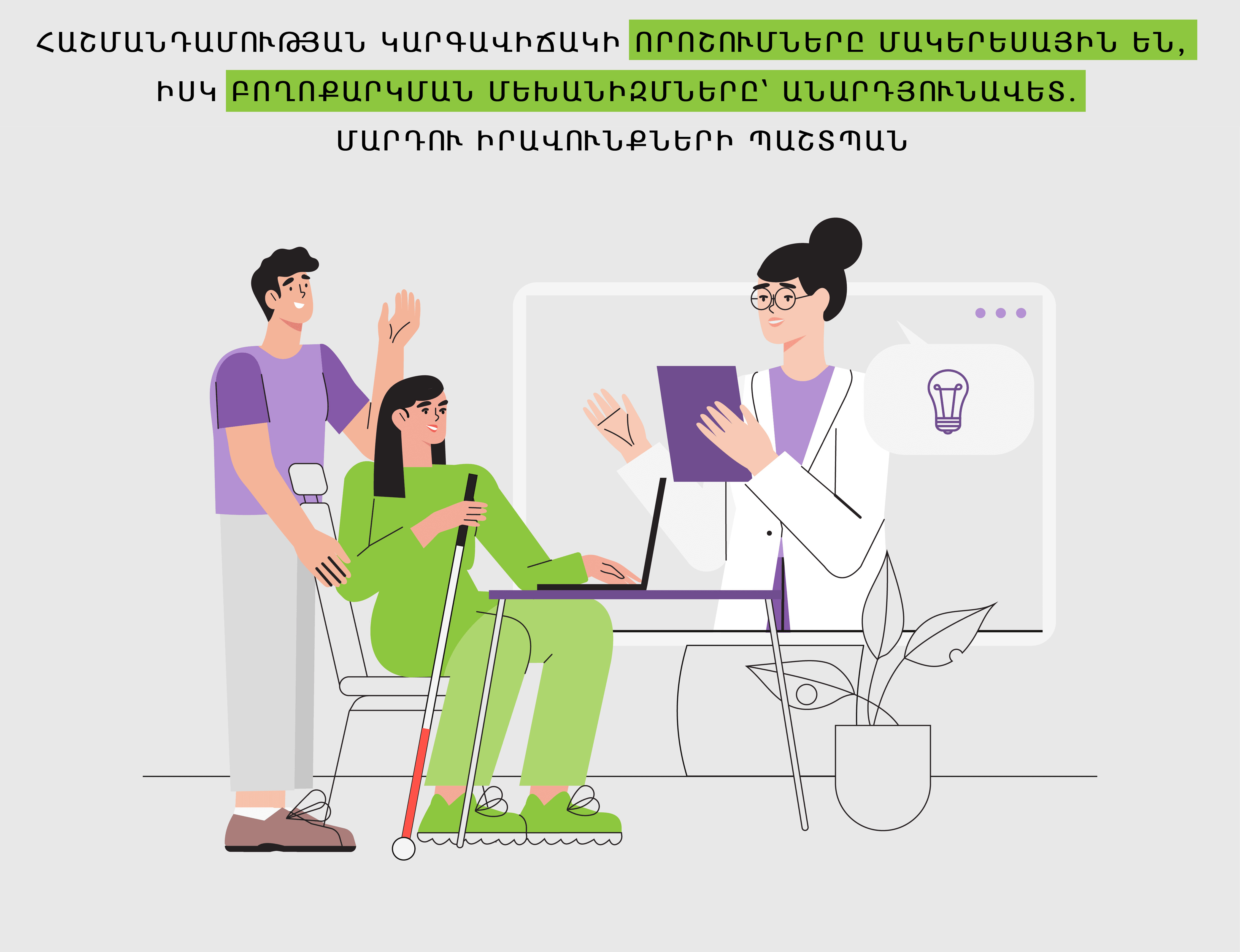 Complaints are addressed to the Human Rights Defender that during the socio-medical examinations aimed at determining the status of the disability, an objective examination of a person is not carried out; the real possibilities of a person's vital activities are not taken into account, and a real need assessment is not carried out; instead, the decisions are made with approaches that are subjective and incomprehensible for those persons.

This issue is also addressed in 2020 annual report of the Human Rights Defender.

Thus, according to the complaints, the medical documents on the health of the examinee were submitted to the socio-medical examination committee, as a result of which, the committee members decided that the latter does not indicate an impairment of the normal functioning of the body.

On the basis of those decisions made by the committee, either no disability status was determined for these persons or the existing disability group remained unchanged. However, the results of the complaints serve as evidence that the above-mentioned justifications of the commissions did not, in fact, take into account the actual changes in the quality of life of the person, regardless of the fact whether there is an impairment of the normal functioning of the body or not.

For example, in one of the applications, the complainant stated that although 3 fingers from their one hand and 4 fingers of the other were amputated, a third group of disability was determined for them as a result of the socio-medical examination, on the grounds that the stable functioning of the hands was not impaired.

However, the standards of the socio-medical examination did not allow the consideration of the specific case that the complainant was engaged in construction work, and at that time did not have the necessary skills to improve his quality of life and to secure his independent living. At the same time, the consultation given after the examination (that is,  to master their skills in another area) was not even essential, since the necessary guidance was not provided, and opportunities for the implementation of the relevant rehabilitation program were not offered.

Moreover, because of the lack of community-based services, they were entirely unavailable. As a result, the person was deprived not only of the opportunity to provide for himself in the given situation but also faced the problem of the unavailability of supporting opportunities and services in solving the raised issues.

Problems regarding the determining of disability status or changing disability groups continue to further deepen as a result of the ineffectiveness of the appealing mechanisms of the committee.

The monitoring conducted by the Office of the Defender and the observations of the members of the public council adjunct to the Defender prove that in case of appealing an administrative act, only a cursory examination of the acte is often carried out and the decision remains largely unchanged; nether a complete analysis of the person's complaints and information, nor a documentary examination is carried out.

Citizens who have addressed their complaints to the Human Rights Defender do not trust the mechanisms for appealing the decisions of the socio-medical examination committee. For example, appeals are addressed to the Defender mentioning that people who are against the decision of the committee do not want to appeal it in many cases, considering it a waste of time.

Citizens are convinced that even in the event of an appeal, their explanations will not be heeded. Only formulations that exist in documents will serve as a ground, and the body examining the appeal will ignore their arguments. In other words, the decision-appealing procedures are perceived as unnecessary formalities, rather than an additional opportunity to protect their rights.

The awareness of the procedures for appealing the decisions of the socio-medical examination committee remains problematic, since, as a rule, people pay attention only to the conclusions of the examination, and the state does not take sufficient steps to make these procedures more credible and effective.

Moreover, people are seldom aware of the possibility of having their own doctor-representative take part in the examination, especially if they are undergoing a socio-medical examination for the first time.