Complaints about inconsistent approach to tuition reimbursement and students loan: the observation of the Human Rights Defender on the 14th action 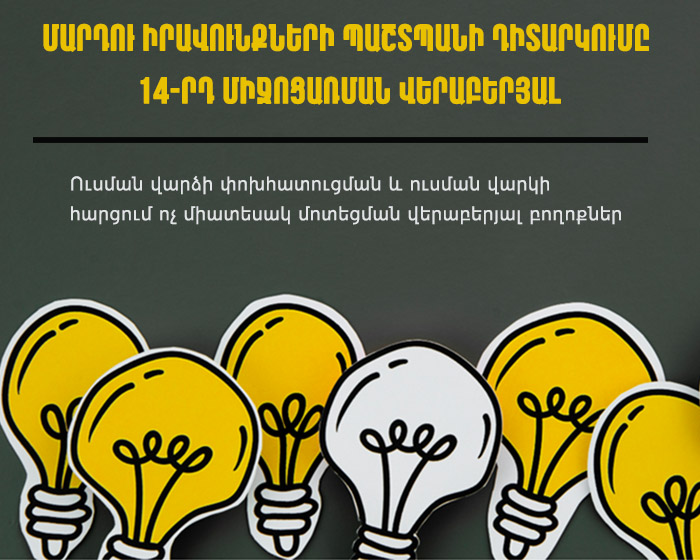 The Human Rights Defender has received verbal and written complaints about the 14th action to neutralize the impact of novel coronavirus (COVID-19) in Armenia, as well as carried out monitoring of mass media and social media.

The Government adopted the decision regarding the action on April 23, 2020. Within the framework of the action the students are provided with the support of:

- full or partial tuition reimbursement (100% or 75%) with certain reservations;

Moreover, from the tuition reimbursement can benefit all undergraduate, graduate and residency program students with high academic progress and studying full-time in one of 21 universities included in the list approved by the Government.

The main issues raised during the study of the complaints addressed to the Human Rights Defender regarding the 14th anti-crisis economic action are the following:

- students with high academic progress are not getting tuition reimbursement in connection with the differentiation of higher education institutions;

- tuition reimbursement is not granted to the students with high academic progress studying in the universities included in the list approved by the Government due to the reason that they were enrolled in a distance learning system;

- the impossibility of getting a student loan due to the bad credit history of the student or his/her family member.

In one of the cases, a full-time student at the European University informed the Human Rights Defender that he had high academic progress (91% GPA) and expressed his dissatisfaction to the Defender that he could not benefit from the tuition reimbursement because the educational institution was not included in the list of universities defined by the Government.

In another case, a citizen applied to the Human Rights Defender informing, that he was studying in distance learning system at the Yerevan State University (the university is included in the list of universities approved by the Government) with high academic progress (with GPA of more than 90%), however he could not benefit from the tuition reimbursement because of studying in the distance learning system.

Complaints were addressed to the Human Rights Defender from the students, that banks did not provide them with student loans due to the bad credit history of their family, as a result of which they were unable to benefit from the 14th action at all.

For example, a 5th year student studying in distance learning system in one of the higher educational institutions in the Republic of Armenia applied to the Human Rights Defender informing, that in addition to not being able to benefit tuition reimbursement opportunity under the 14th action, he was also unable to get a student loan due to the bad credit history of his family member.

With another complaint, a 3rd year student of the State Medical University after Mkhitar Heratsi was denied a student loan by the banks due to the bad credit history of his parents.

Thereby, complaints addressed to the Human Rights Defender from the students refer to the fact, that, according to them, the Government’s distinctions lack sufficient justification, as well as the Government did not take into account those students whose families had financial difficulties due to the spread of the new coronavirus, including those who worked and studied at the same time.

According to the complaints, the Government considered the university and educational system as criteria, instead of providing assistance in a form of compensation.

The Human Rights Defender welcomes the fact of providing support to students as a part of anti-crisis actions aimed at minimizing the impact of COVID-19.

At the same time, it is necessary to clarify why other criteria or conditions were not taken into account except of having high academic progress when providing assistance to students within anti-crisis actions during the State of Emergency.

This refers to the financial difficulties of students, their families, the risks of not providing loans by banks, etc.

A corresponding letter was sent to the Ministry of Education, Science, Culture and Sports on all the issues mentioned issues.