The results of the Human Rights Defender’s monitoring with regard to Action 8: From the types of economic activities to the lack of awareness-raising 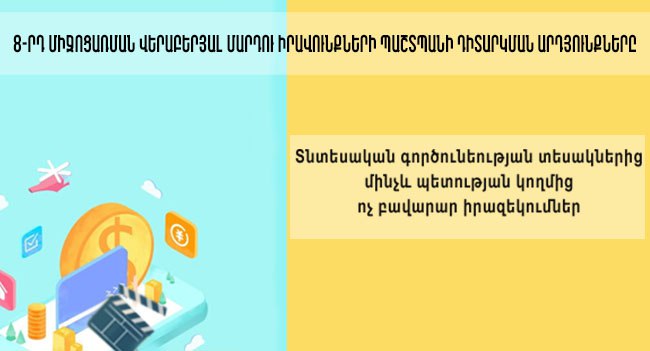 Following the declaration of a state of emergency due to novel coronavirus pandemic (COVID-19) in Armenia, the companies and employees operating in Armenia have encountered financial difficulties. To address the impact of those difficulties, the Government adopted the anti-crisis economic Action 8.

The action was adopted on March 30, 2020, the beneficiaries of which were individuals that from March 13 to March 30 were employed in the spheres listed by the Government’s decision defining Action 8 or were private entrepreneurs, and complied with other requirements.

The Human Rights Defender initiated monitoring, including monitoring of the media publications, with regard to Action 8. In addition, the Defender conducted a discussion of the addressed oral and written complaints. The Human Rights Defender has received 77 complaints (including 28 calls to the 116 hotline number) with regard to Action 8 that addresses the economic impact of COVID-19 in Armenia.

1. The issues identified by the examination of complaints addressed to the Human Rights Defender with regard to Action 8 primarily relate to:

·              missing the deadline prescribed for changing the classifier due to improper awareness-raising on the types of economic activities reflected in tax calculations.

In particular, cultural schools engaged in the aesthetic education of children applied to the Human Rights Defender. For example, one of the headmasters informed that the activities of the cultural school were suspended due to the limitations connected with the coronavirus. According to the complaint that the salary of the schools’ employees is generated solely from the tuition fee of the students, and the school found itself in a difficult financial situation due to the limitations: the school was not able to pay the salaries of the employees and needed assistance.

In an official letter addressed to the RA Commandant, the Human Rights Defender raised the issue of including the organizations of the mentioned field within the list of target areas. Based on the Defender’s recommendation, the organizations carrying out educational activities in the fields of culture, music, sports, and dance were included in the list of the Government decision defining Action 8.

3.  Complaints on the failure to benefit from Action 8 by business enterprises and employees due to missing the deadline were also addressed to the Human Rights Defender.

Action 8 stipulates the types of activities (employees, private entrepreneurs of the field) that may benefit from the financial assistance in the amount prescribed by the Action. However, though the organizations operating in the fields prescribed by the Action were in fact carrying out the stipulated activities, they were unable to benefit from the Action as they had reflected another type of economic activity classifier (that differed from their actual activities) in their tax calculations.

For example, in one case, a complaint was addressed to the Human Rights Defender, providing that the business enterprise had corrected the economic activity classifier after the fixed deadline, and failed to benefit from the Action.

The Office of the Human Rights Defender carried out a systemic analysis of this issue. It was revealed that the Government Decision of April 30, 2020 introduced an amendment setting the period from April 30 to May 5, 2020 for correcting the economic activity classifier.

The applicants expressed their concerns that they had only 5 days (from April 30 to May 5) for changing the economic activity classifier. Moreover, the complainants provided that during that short period of time, the state failed to carry out proper awareness-raising on the time periods for correcting the economic activity classifier and on the change of the deadline. As a result, a number of businesses were deprived of the opportunity to benefit from Action 8.

For example, in a written complaint, the applicant (private entrepreneur) informed the Human Rights Defender that he, in fact, provided tourism services, but he had reflected an economic activity not coinciding with his actual activities in his tax calculations. While not being informed about the deadline for correcting the classifier, the individual entrepreneur applied to the State Revenue Committee for correcting the economic activity classifier after the deadline and failed to benefit from the Action as a result. The applicant provided that he missed the deadline due to improper awareness-raising and the short time period.

In another case, an entrepreneur applied to the RA Human Rights Defender and informed that he owned a restaurant and carried out economic activities in the field of public catering. However, he mentioned “other services” as an activity classifier in his tax calculations. He also failed to benefit from the Action as he was not informed about the short time period for correcting the classifier and applied to the competent body after the deadline.

The Human Rights Defender presented recommendations to the Government on setting a longer deadline to address the issues described and carrying out proper awareness-raising in that regard.

4.The results of both the monitoring and the discussion of the complaints were regularly summarized and, based on the nature of the issue or recommendation, were presented to the Government or Commandants office with relevant recommendations. Based on the Defender's recommendations, the necessary amendments were made, which made it possible to eliminate the above-mentioned obstacles.

The Human Rights Defender welcomes the periodic extension of the list of target areas. It is noteworthy that 5 target-areas were envisaged in the Action’s initial period, but the list of the areas was extended to currently include 32 areas.

However, the Defender finds it necessary to underline, that while setting steps to be taken for benefiting from the Action, the state should consider that the anti-crisis economic and social programs addressing the impact of COVID-19 are new for the public: hence, the state should carry out proper awareness-raising with regard to their terms and conditions.

In other words, the current circumstances and the realities of the State of Emergency extend the scope of the positive obligations and the legal burden of the state with regard to private organizations or persons.